Posted by Dave Brill on September 16, 2015 in Uncategorized

Assia and I have just returned from Freising, a little town in Bavaria, after a spectacular few days. We were helping set up the exhibition called RAUMFALTEN (Space folding) featuring the work of Tomoko Fuse and Heinz Strobl.

I was proud to introduce the exhibition at the Vernissage on 28 August. 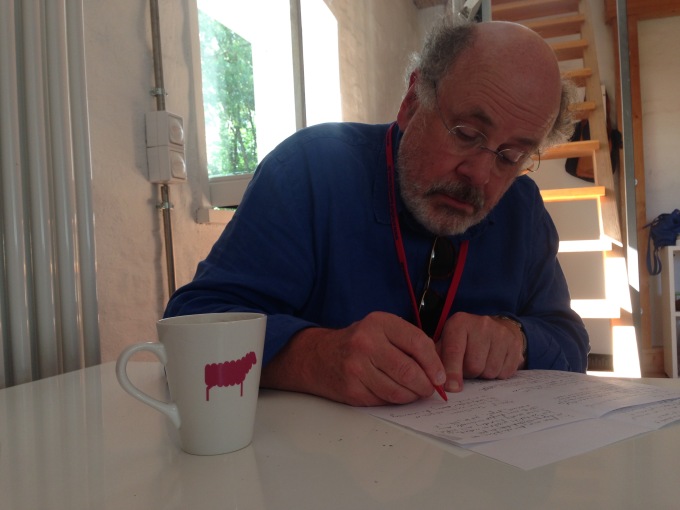 Finishing touches to the speech

Waiting for the crowds

Here’s a transcript of the speech:

28 August 2015
Introduction
We are very lucky to be able to see here the work of two modern masters of origami. Origami is not just a child’s activity: the artists show in this exhibition that it is really a serious and beautiful art form, worthy of a prestigious art gallery like the Schafhof.

I’d like to introduce the two artists, who I have known personally for more than 25 years, and to say something about their work and their ideas.

Heinz Strobl is intrigued by the beauty of mathematics and geometry, and it is his wish that you should begin to share this fascination. The material he uses is obsolete computer punch tape rolls, which will be remembered by those of you of a certain age. Heinz has always used these apparently endless strips. They are his trademark, and indeed this could be described as the ultimate kind of recycling. With them, he creates his own special kind of endless space and universe. Have a look at the animations in the exhibition, and maybe you’ll start to understand the mysteries of the fourth dimension, thanks to Snapology and the 120-cell construction which Heinz displays. Maybe then you can explain it to me.

Tomoko Fuse is a quiet, modest and smiling lady, who has earned the title of the Queen of origami. Her output is enormous, and it shames other origami artists like me. She rules over many styles, including elegant boxes, geometric structures and polyhedra. These are often made from many identically folded units, and they are connected by folding alone. She’s well know for her tessellations, and of course you should look out for the magnificent book SPIRAL, which was published by Viereck Verlag a couple of years ago. It was the conception of Paulo Mulatinho (joint curator of this exhibition, with Fritz Dettenhofer) and his team. 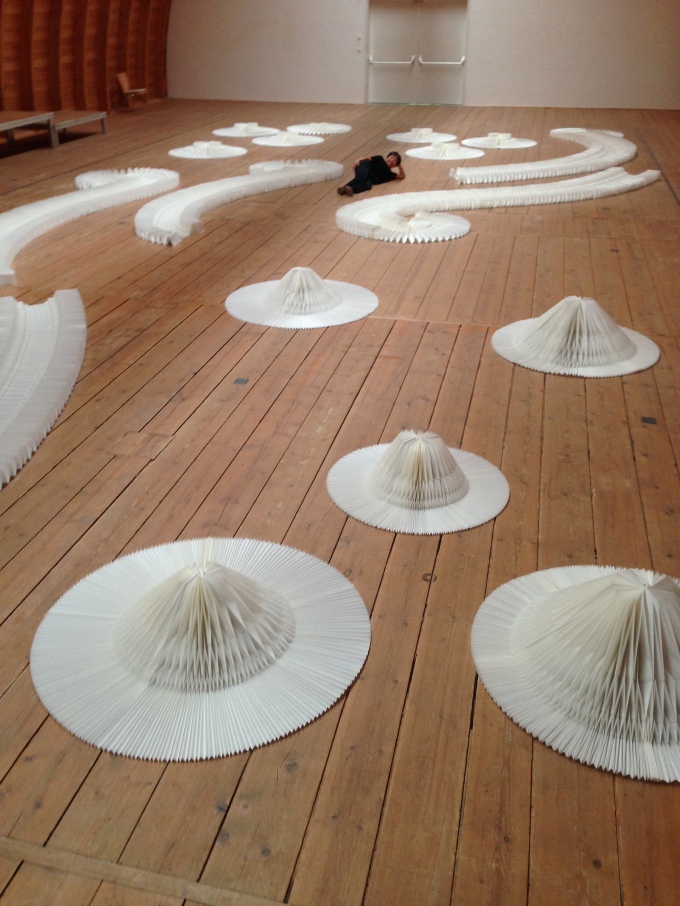 But this is the first time Tomoko has faced the challenge of filling a specific space, and one as large as the first floor hall of the Schafhof. She chose Shoji paper, normally used for sliding screens and walls in Japanese houses where it is normally replaced every year. This particular type of Shoji paper is fire-resistant, so it’s stiff, and thus is particularly suitable for folding. The paper comes in rolls 30 meters long and 1 meter high. The whole work took Tomoko six months. The subject is a representation of a Japanese stone garden. If you go to Japan, I recommend a visit to Ryōan-ji Temple in Kyoto, one of the most famous Zen-Bhuddist stone gardens. There, and Tomoko hopes here too, you’ll find it impossible not to be filled with meditative feelings of peace and calm.
So, please enjoy this exhibition. You’ll see that it’s possible to make things of great beauty, intricacy and subtlety, with the very simplest conceivable raw material: paper. Just by folding it.
David Brill
http://www.raumfalten.de/
http://schafhof-kuenstlerhaus.bezirk-oberbayern.de/
http://www.viereck-verlag.de/