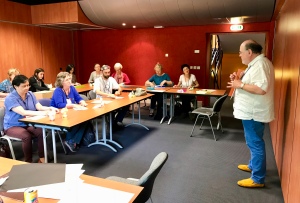 I enjoy teaching origami to groups, though I do it less frequently these days. Assia and I have recently returned from the 40th anniversary convention of MFPP in Aix les Bains in the Savoie region of France, where we were very honoured to be two of the invited guests, along with Alessandra Lamio, Eric Vigier, and Nicolas Terry.

It was there that I was reminded how enjoyable the teaching process can be. Before a workshop, preparations and rehearsals are essential, particularly when you’re as rusty as I am. This adds to some pre-stage nerves, normal in these circumstances, reminding me of the old adage: “90 percent perspiration, 10 percent inspiration”.

But we both found that once on our feet and in front of an enthusiastic audience, we relaxed and thoroughly enjoyed ourselves.

I’m keen to emphasise that everyone should have fun at origami workshops. Suggested procedures have been put forward by some origami organisations for both students and teachers, and although these are important, I strongly believe that informality, humour and dialogue should be established as soon as an origami teacher stands in front of the audience, with the large demonstration square at the ready. All too often, origami workshops are desperately serious occasions, sometimes with an uncomfortable atmosphere of “master and student ” rather in the Eastern tradition. Happily this trend is now largely a thing of the past in the international origami community.

How to achieve a relaxed and happy atmosphere? At the outset I make a point of establishing a rapport with the class. I INSIST on informality, and positively encourage heckling, interruptions, even joke-telling and spontaneous singing at my classes. In Aix, my class, completely uninvited, burst into a group performance of “Aux marches du palais” during our workshop.

I was reminded of a similar incident In Kecskemet, Hungary at the convention of Magyar Origami Kör in 2006, during the repetitive folding of a large number identical units. But I don’t have any information about the delightful folk song which was performed then.

Other techniques? If you are folding an animal, what better way to feel and absorb the character of the subject than to practice your skills of mimicry by proclaiming loudly the sounds made by the animal? In Aix, I taught the latest incarnation of a cat design.

Here was a fine opportunity for class-members to relate their cat stories and experiences, as well as showing how well they understood cat language. I suggested that they should demonstrate their satisfaction or otherwise by making happy or angry cat noises. “Meow”…. or “Graaahw!”

Thanks to MFPP for inviting us to their memorable birthday celebrations. You can see a selection of our memories here.